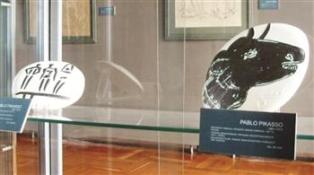 An interesting discovery recently saw a collection of decorative and dessert plates and other tableware that featured motifs of Pablo Picasso came about in a state art museum in Uzbekistan. The collection was long-forgotten which was discovered by workers of the museum from its archive. The pieces included works that featured Picasso motifs that include images of a bull’s head, a woman’s face and a dove and were discovered more than 40 years since they were donated.

They then brought in Gulchehra Akhunova, an art expert who helped put the works together and showed them off in the exhibition who said that they were actually looking for some Russian porcelain items to full up the avant-garde Russian department last year when they came across the Picasso works by chance. Picasso of course is more known for his works in painting but he did actually ventured into ceramics in the 1940s where he created hundreds of works in Madoura, a French pottery. The ones that were in Uzbekistan were the ones which were donated by the widow of Picasso’s friend to the Soviet Union.

According to the records at the museum, it was a donation from Nadia Leger of France on behalf of the French Communist Party’s Institut Maurice Thorez which involve 12 ceramic works. The first 7 items were received in 1968 while in 1971, four ceramic dessert plates were donated while one piece is yet to be accounted for. Fernand Leger, the late husband of Nadia Leger was a close friend of Picasso who both had sympathy towards Soviet Socialism and was friends with the then French Communist party leader Thorez.