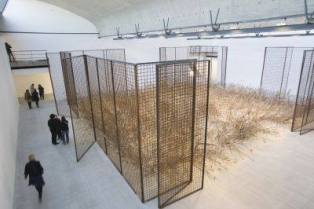 It seems that art galleries are slowly but very dominantly moving into the mainstream with major public spaces being used and turned into exhibition places. Where this is concerned, a major bank in Milan, Italy recently was turned into a major art gallery and following this, Larry Gagosian, a renowned US art mogul has done the same with an airport.

The new art space was placed inside one of the main private air hub of Paris and was designed by Jean Nouvel in the 1950s, a renowned French architect on the Le Bourget warehouse located towards the northern part of the city. This would essentially be the 12th gallery around the world operated by Gagosian and his second one in Paris which was officiated with the recent FIAC (Foire Internationale d’Art Contemporain) International Contemporary Art Fair.

According to Jean-Olivier Despres, the co-director of Gagosian’s galleries in Paris, it would be a new way of viewing art and a great site for travellers. This would be the second international gallery to move into the art capital of Paris following the large space by Thaddeus Ropac of Austria and Gagosian plans to show works that are too big to exhibit at its other gallery in Paris. Here, it would provide some 1,650 square meters of space for exhibitions which could also accommodate artwork that are up to 15 meters tall. The new space would surely attract travellers into Paris where the Le Bourget’s landing strip is all but a stone’s throw away while the Roissy international airport is only minutes away.