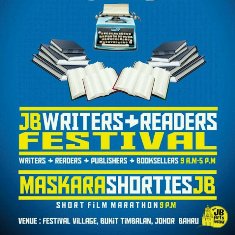 Benny Lim, the Head of School of Communication and Creative Arts of KDU University College found that the recent JB Arts Festival was an ideal platform for his students to further explore themselves through the arts in one of the largest arts festival in Malaysia which allowed them to experience how it is like in the arts scene.

The JB (Johor Bahru) Arts Festival is the longest-running arts fest in the country that involved a group of photographers, writers, artists and actors throughout the month-long festival. The students were involved as interns and helped out in the festival that included a host of visual arts presentations, a theatre show as well as many other events and activities.

There was the ‘Within the Frame’ photography exhibition that involved 50 exhibits of students’ assignments as well as the winners of the Photolympics photography competition while 11 studetns were involved in the ‘The Personal, The Truth, The Real Thing, An Evening of Monologues’ play directed by Richard Chua, one of the lecturers of the Department of Communication and Media Studies of the university college.

On top of that, the ‘Visually Appealing, Conceptually Indifferent’ visual art exhibition was also held that was themed ‘MalaysiaKu – The Unforgotten Negara’ that featured infographic designs by the students in Mass Communication. This was an exhibition that showed off some visually appealing and informative posters that encircled around the accomplishments and development of the country since independence.

According to Pouline Koh, a lecturer in this field, the exhibition was timed with the country’s Merdeka and Malaysia Day celebrations recently which involved the use of typography and composition using Adobe software and this was seen in one of the art work entitled ‘The Harimau Smashers’ by Ian Chong Bing Tian.

There was also something for the literary students where they get to join the inaugural Johor Baru Writers and Readers Festival which was part of the festival in which discussions on social media, writing and such were held.