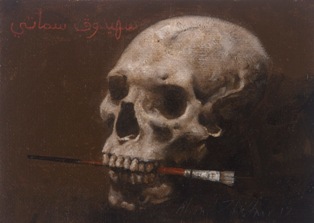 It was quite a unique environment to see such a reputable list of Malaysian artists’ works gathering within the second floor of the shoplot in Taman Cempaka where House of Matahati (HoM) resides. There were some very significant elements of the show entitled ‘Transit A4’ in which all 77 of the artists produced works that were confined with the A4 paper size be it a painting, photograph, sculpture, installation or anything else.

First of all it combined the works of some very established artists with some emerging ones as well as some which have been ‘missing’ for a while. Secondly, they produced work that was of a standard size across the board (A4) and thirdly, they all did it for a good cause. There could be certain artists who have been known to be of a different class while there were also claims of egos and such but all that was put to rest in a show of collective unity among Malaysian artists for a better future of Malaysian art.

And that was just what was seen at Transit A4 which features works of Ahmad Zakii Anwar, Zakaria Ali, Yusof Majid, Jalaini Abu Hassan, Chong Ai Lei, Jeganathan Ramachandran and Adeputra Masri, among many others. In some ways, it was also a good place for collectors to buy works from these artists at a more affordable price which was to reflect the life journey of the artists and their experiences through the transitions of their own journey and techniques, explains Bayu Utomo Radjikin, the director of HoM and a renowned artist himself.