Top 10 most expensive paintings of all time 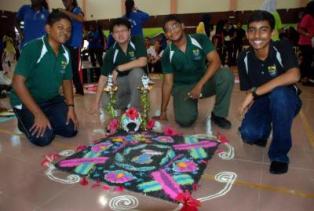 A group of boys from the St Francis Institution of Malacca recently made history by joining the state-level 1Malaysia Rangoli Competition organised by the Educational Welfare Research Foundation of Malaysia. The competition was held in collaboration with the Tamil section of the Malacca Education Department saw some 300 students in the state competing. There were 70 secondary schools that took part in the competition which was organised in conjunction with Deepavali which will be in November.

The competition was held at the SMK Ayer Keroh which was split into 2 categories which are Under-15 and Under-18 categories respectively. The former was won by SMK Infant Jesus Convent while SMK Iskandar Shah from Jasin won the latter.

Meanwhile, it was an exciting and fun experience for the St Francis boys who learned about making this traditional sand art that used rice flour, rice or sago that draws the image to be placed on the entrance of Hindu homes to usher in the Hindu Goddess of Fortune, Lakshmi and is commonly practiced during Deepavali.

According to N Rajiv, the group decided to join the competition since PMR was over and they thought it would be fun. His classmate said that they were not familiar on the techniques and got help from their teacher where the design was then finalized with pastel blue, purple and yellow were used based on the 1Malaysia theme.

Although they did not win, it was a remarkable effort by the boys from St Francis as they were the only all-boy group in the competition.