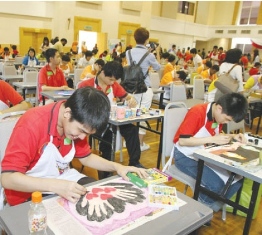 The recent Art Competition and Exhibition for Special Needs People which was organised by the local Rotary Clubs and held at the National Visual Arts Gallery saw some remarkable works of art from more than 600 special needs people who joined the competition through their respective local clubs.

The competition was held concurrently in several places in Selangor, Penang, Ipoh in Perak, Malacca, Johor and Kuantan in Pahang with the winning artworks being showcase at the national gallery. Participants were at the show where they attended the exhibition with their respective caregivers and it was a truly show of determination and persistency by the group of artists.

The prize-giving ceremony was held in recognition for the remarkable effort and achievements of the special needs people who have shown to the world that leading normal lives is no hurdle for them.

Clement Ooi Kit Meng won the consolation prize in the Selangor state level who was diagnosed with autism at the age of 3. He came smartly dressed with his mother, Annie Kam who has never given up on her son including taking him to art classes from the age of 7. His achievement today is testimony that special needs people are also able to lead normal lives through the right channels and programmes.

Another winner was Nur Ahmad Mursyiddi Baharum, who had a natural talent in painting and drawing who insisted that his mother bring him from Pahang to the capital for the ceremony. His mother, Noorekhshamiah Che Sulaiman said that they have never thought of Nur Ahmad as a special needs person through his love for the art.