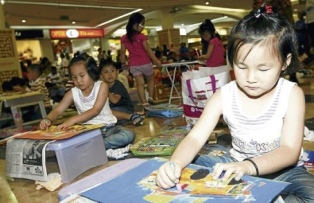 Some 200 children and teenagers recently participated in the 17th Subang Jaya Children’s Art Competition at The Summit USJ in Subang Jaya which encircled around the theme of ‘Our Fireman, Our Hero’. It was an appropriate theme for the children to pay tribute to the firemen who are often overlooked for their efforts and heroic and nothing was more suitable than to use art as their expression points.

The participants came from all over the Klang Valley and aged between 5 and 17, they contested in several categories. To make the competition more accessible for children, there was also a category for children with special needs between the ages of 7 to 12 who all came with their own colouring mediums like coloured pencils, crayons and watercolours. All in all, the 2 hours saw some talents and the brewing of creative juices all around. One Ho Mun Juein, the winner for the 16 to 17 age group said that he done some research on the internet before coming up with his artwork where he found out that firemen do not only fight fire and saves lives but they also do other things which some might regard as more trivial like removing beehives. Meanwhile, sisters Samantha and Nicole Leong both won their own respective categories.

The event was organised by the Neighbourhood Watch groups of USJ2 and USJ6 together with The Summit USJ, Petronas Dagangang, the Selangor National Unity and Integration Department as well as the Fire and Rescue Department who came in through their SS17 branch.