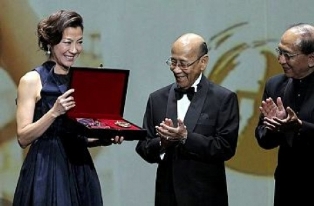 Datuk Seri Michelle Yeoh is a person who needs no introduction in the film industry. She was the first Asian actress who acted in a James Bond film when she played a starring role in the movie ‘Tomorrow Never Dies’ with Pierce Brosnan.
To honour her efforts in the arts and for putting Malaysian in the world map, she was awarded a Datukship then while at the recently held Royal Arts Gala at the KL Hilton Hotel, she was honoured with the Lifetime Arts Achievement award which was given to her by the Yang di-Pertuan Agong Tuanku Abdul Halim Mu’adzam Shah.

Michelle, who was born in Ipoh said that she was touched and grateful for being recognized for her works as an actress in the highly competitive and sometimes discriminating Hollywood. She said that nothing meant more to her than to be recognized in her own home for having received the award on the night which was to raise funds and support from the private sector in the development and promotion of the local performing arts industry.

The Yang di-Pertuan Agong and Raja Permaisuri Agong Tuanku Hajah Haminah graced the event while there were also other notable leaders like Information, Communications and Culture Minister Datuk Seri Dr Rais Yatim and his wife, Datin Seri Masnah Rais as well as renowned local practicioners like M. Nasir, Adibah Noor, Tony Eusoff and Harith Iskander who also contributed their part for the effort. The event was themed “Journey Through the Arts, Energising the Future”which saw more than 10 companies from the private sector doing their part while there was also a silent auction of art pieces.