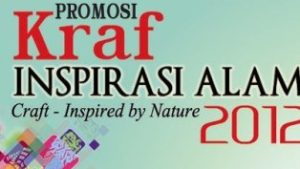 8 local fashion designers showcased their traditional batik designs at a fashion show recently. The event was held the Kuala Lumpur Craft Complex which was organized in conjunction with the Craft-Inspired by Nature promotion. The Nature Inspiration fashion show took place at Laman Plaza in Kuala Lumpur which was graced by the guest-of-honour Datin Rabiatul Adawiyah Arshad, the wife of Datuk Sohaimi Shahadan, chairman of Kraftangan Malaysia.

Essentially, the designs were inspired by nature and rightfully applied the traditional batik art as the platform. It was to create more awareness among Malaysians in particular the younger group of this cultural heritage and tradition which is our pride as well as the importance of preserving our natural resources. Basically, Malaysians were encouraged to use local products like batik in their daily practices where the designers used the natural elements in their products which apart from the fashion show include exhibitions and demonstrations while there were also many other related events as well.

There were works by Rahayu Ramdzan which were targeted for Muslimah attire while Jaludin Zaini showcased the Pua Indah collection that used Sarawakian motives and accessories from the Sarawak Craft Council. Roslan Hussain offered his collection that themed around ‘Song of Nature’ through his floral patterns and colours while there were also works by Jasni Abdullah through the Jafiqa Couture collection as well as the designs from Munir Yahya. Mohd Zahidi Muhammad offered a pink-themed design while Iralia Batik’s Sofeyana Hussin also featured their contemporary designs on this traditional art form at the show.