Playground in Island 2012 – bringing media art together in Sabah 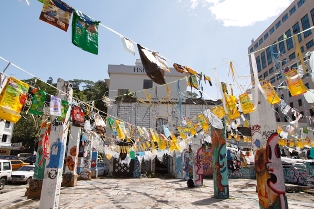 A digital event entitled ‘Playground in Island’ was held in Kota Kinabalu in Sabah recently. The event was a digital event that brought together creative artists and media animators from around the world where they congregated and exchange ideas. Nathalie Boseul Shin, the project director of the event said that the event has been held 3 times in Sabah since 2010 and since it has been done each year, they might make this an annual event.

The event originated as the Digital Media Art Festival in Eujongbu City in 2005. It was used to showcase the promotion exhibitions from the South Korean city and since then, more and more events have been added like workshops and such. It was in 2007 when fans in media art in Korea begin taking notice when the first Digital Playground event was held. And then in 2010, the KYS (Kolej Yayasan Sabah) collaborated with Total Museum of Contemporary Art, Soongsil University and Joongang University that the first Sabah Digital Playground was organized in 2010.

According to Nathalie, more than 30 Korean artists attended the 2010 event that showed off works in media art while workshops were also organised. It was truly a great experience for the students and teachers and this time around, the 2012 Playground in Island was bigger and included areas like motion graphics, short films, animation and live space video being deliberated, among others. Meanwhile, Bruno Voon, the permanent secretary of Resource Development and Information Technology Minister, said that it would be a good event to for Sabah to work with Korea in creative and innovative programmes.