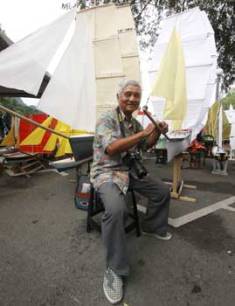 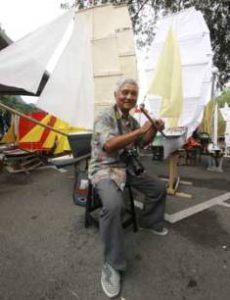 79 year old veteran Raymondo Allas said that there is a need for foreign craftsmen to be invited in helping local craft makers in improving their products in junk making. He was one of the participants of the recent Jong Regatta Competition from Bau’s Batu Kawah.

He has been a consistent participant of the Regatta event since 1960 and with 52 years of experience under his belt, he believes that it is time for local junk makers to start working of works at the international standard to improve on their performance and to draw more participation in the event.

The 2012 Jong Regatta was held at Tasik Biru and was officiated by Datuk Dr James Dawos Mamit, the Deputy Tourism Minister. Raymondo’s Sri Astana which he joined in 1960 is a 7-time schooner Class A Champion and for this year’s edition, he will be showing off his new Cutty Sark II and Ertica Erna II which was part of the previous Jong regatta in Indonesia.

This unique art form surely has made its mark in the an industry where art is commonly referred to the likes of paintings and more visual based. Hence, Raymondo said that while junk making is not a dying trade, there has not been much improvements and developments for the last 30 years with most designs showing off the same type of quality and looks. He added that he hopes his new designs will become a platform for others to follow not in terms of design but more as a reference point in terms of innovation and quality.