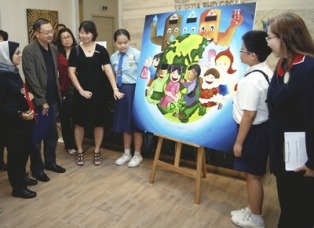 The KL Eco City (KLEC) Mural Painting Competition is set to take centrestage and become a very large art canvas which will involve the hoarding around the 9.7 ha land between Jalan Bangsar and Mid Valley City. This is because 40 primary school students who joined the competition will have their works displayed along the hoardings.

The KLEC is a development project undertaken by prominent property developer SP Setia and DBKL (Kuala Lumpur City Hall) and the hoardings cover what is being built inside and since it is such a large space, they might as well do something creative with it. This is where the 5 artworks by the contestants come into play where students like Ida Melati Merican of SK Bukit Bandaraya said that it has been a good experience for them. Some went through great lengths to ensure that the work produced was the best quality like SRJK Puay Chai who delegated and divided the work among its members.

The participants were students in Year 6 of their own primary schools who just finished their UPSR examinations where the prizes include RM5,000, RM4,000 and RM3,000 for the top 3 prizes while the remaining 2 schools would each receive RM1,000.

The judges comprised of Boon Che Wee, the chairman of the Green Building Index Accreditation Panel, Norzaini Noordin, the deputy director of the Building Architecture Department, Ong Kah Yee, the senior executive of the KLEC Corporate and Public Relations and Azhar Osman, the graphic designer of NSTP Group. Winners will be announced at the Setia International Centre Property Gallery very soon.