Artist sends artwork to space and will last billions of years 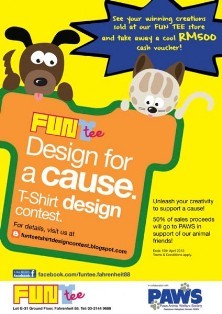 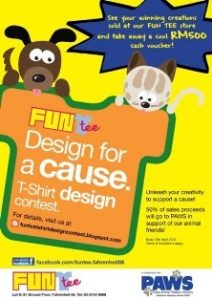 Fun Tee recently collaborated with PAWS (Paws Animal Welfare Society) in the ‘Design for a Cause’ contest. They have identified the 7 winners which were announced at the Fun Tees store in Fahrenheit88 in Bukit Bintang. The contest required the participants to create designs with a message to support an animal cause which was part of the awareness programme for animal welfare.

The ‘Design for a Cause’ event was also aimed at raising funds through the sale of t-shirts and the grand prize was won by 13 year-old Michelle Chow Tien Nee who took home a RM500 voucher for Fun Tee. The other 6 winners in the consolation categories took home RM50 vouchers each.

The winning designs of the Fun Tee-PAWS project were put on sale for RM40 at the Fun Tee outlet in Fahrenheit88 where half of each sale will be contributed to PAWS where it will be used to help run the shelter home. Edward Lim, the shelter manager said that these contributions would surely be of great help and assistance as it would require between RM40,000 and RM50,000 to run the shelter each month.

Essentially, the money would be needed to pay the salaries of the workers, medications for the animals and for other maintenance purposes where it houses 500 animals like cats, dogs, birds and even snakes. Lim also said that it is important that people are aware of the efforts of PAWS and such contests would surely raise the awareness level among the general public.