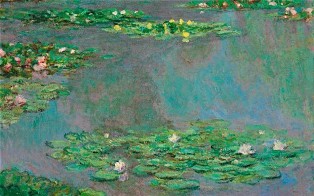 In one of the Christie’s latest auctions, the water lilies painting entitled ‘Nympheas’ by Monet was sold for almost US$43.8 million which is about RM134 million. Meanwhile, Wassily Kandinsky’s ‘Studie fur Improvisation 8’ only managed to sell for US$23 million.

It was not the type of auction that Christie’s had come to be associated with especially with record-breaking sales and such because there were many mid-level works that could not be sold off. In fact, the 1905 painting by Monet was estimated to be sold between US$30million and US$50million but could only reached US$43.8million.

The Kandinsky painting meanwhile fared worse where it was estimated to fetch between US$20million and US$30 million and was only sold off at the lower end of the estimate. It was however, a new auction record for paintings by Kandinsky.

And the bad news really was that 30% of the works that were auctioned failed to reach their reserve prices which means that they were not sold. In total, the auction raked in slightly shy of US$205million while the pre-sale estimate was around US$210 million on the low and a high of around US$315million.

Despite that, Christie’s has reported that they were happy with the results particularly with the selling of the Monet and the ‘Une Muse’ Brancusi sculpture that came under the hammer for US$12.4million. Brooke Lampley, the Head of Impressionist and modern art at Christie’s said that it was a night for Classic Impressionism with positive signs that collectors are selling their artwork in the market. The mood however was more subdued with half of the salesroom emptied even before the end of the sale.