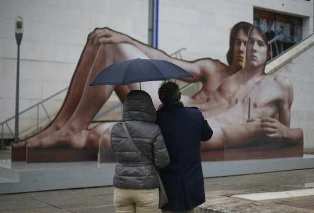 An art exhibition in Vienna’s Leopold Museum raised some controversy when it showcased male nudity, which was somewhat unconventional although it is no surprise in the art industry. While it is common that nudity and naked figures are used in art, it is the extent of the entire campaign that brought the exhibition into light. In fact, it was very much the public showing of male private parts that arose controversy in the first place.

The exhibition was entitled ‘Nackte Manner’ which was in German and translated as ‘Nude Men’ and the Austria museum posted a naked man image entitled ‘Mr Big’ by Austrian artist Ilse Haider at its exterior wall which was not very well received by the general public.

The show involved several types of media like paintings, sculpture, photographs and others which depicted male nudity in art forms that were produced since the 19th century. Since the show opened, the museum had already received countless complaints and hence they have censored a photograph in certain advertisements. This was in regards to the work of Pierre et Gilles which depicted 3 football players who are completely nude. This was one of the images that have been used for its advertising campaign around Vienna.
The uncensored version of the photograph was used in the catalog’s cover while there were also other works like the drawing of Bruce Nauman that featured 5 naked man, Louise Bourgeois’ ‘Fillette’ phallic sculpture and most notably the ‘Querelle’ poster artwork for the Fassbinder movie by pop icon Andy Warhol, all of which are selected around the central theme of male nudity.