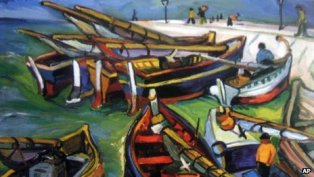 With news of a recent heist in an art gallery in Amsterdam not even close to subduing, another came under the spotlight and this time it was at the Pretoria Art Museum in Johannesburg in South Africa. It was quite an easy deal for the thieves when they arrived posing as an art lecturer and 2 student as the CCTV (Closed-Circuit Television System) during the robbery was out of order. Instead, there were only 3 private security guards on duty at the museum which houses some of the most significant artworks of South Africa.

They paid the $1.20 entrance fee and left with $2million worth of masterpieces but they have to leave behind the ‘Two Malay Musicians’ by Irma Stern on the sidewalk as it was too big to fit into their Toyota Avanza getaway vehicle. That would have been the highlight of their robbery as it was the most valuable among the 6 they took from the museum. The ‘Two Malay Musicians’ is said to be worth around $1.5million.

They had held up the security guard at gunpoint and then they pulled out a list of paintings they want and took off which include works by Gerard Sekoto, J.H. Pierneef, Maggie Laubser and Hugo Naude as well as Stern. Since the robbery, criticisms have been flooding in concerning the security features of not just the museum but museums around the region as well while Gordon Massie, the Managing Director of Artinsure said that it would be hard for the robbers to find buyers for the stolen art.