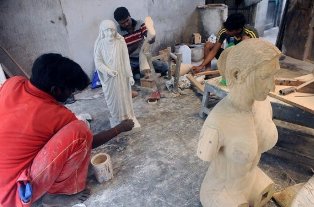 Peter Pereira has taken a unique but growing trend of remembering his late beloved wife. The 82 year old man is calling on the Sequeiras to make a life-size bust of his late wife as he would feel as if she is still ‘around’.

The Sequeiras is currently in the third generation of a family tradition who makes religious effigy which have over the years produced divine figures like Jesus Christ, the Virgin Mary and Parvati, the Hindu goddess and they are based in Smail Giriz village along the northern region of Mumbai, India.

Pereira will be having a life-size bust of Ivy made from fiberglass, thanks to the intricate craftsmanship of the Sequeiras who are skilled in this artform using other mediums like wood and paint.
The village was once a port for Portuguese colonials who brought this art-form here and Benzoni Sequeira said that his grandfather had started this business back in 1920 where since building his first memorial 20 years ago, there has been a surge in demand recently

The works of the sculptures are so good that they have been compared to Madame Tussauds’ wax models which are easier to carve and mould. Furthermore, the wax models can be made from photographs which could be recent and in various angles while the Sequeiras only get those with 1 angle and even those that are old and black and white ones. The remarkable factor about this is that they do not advertise their works or services as they do not need to and word-of-mouth is already sufficient to bring in the requests.