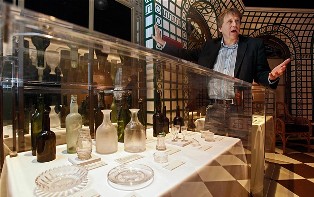 Premier Exhibitions Inc, the company that hold the salvage rights to the sunken Titanic will be selling artefacts recovered from the wreck which is valued at US$189million.  Since it was discovered by explorer Robert Ballard in 1985, there has been more than 5,000 artefacts that were being dug up by Premier since 1987. All in all, there were 8 expeditions made to the ship 2 years after it was discovered and it has now reported that they will be selling off the artefacts.

The tragedy that took about a decade ago that claimed more than 1,500 lives when the iconic Titanic hit an iceberg became one of the major events of world history and since it was discovered, items like porcelain dishes and silver cutlery have been brought to the surface.

The company announced that it signed a non-binding letter of intent to sell the artefacts to an anonymous group of individuals for the US$189 million price tag. The announcement saw Premier’s shares went up by 18% over the deal which it has been trying to sell off in recent years. Premier wanted to concentrate on touring exhibitions but it was then ruled by the federal court then that if Premier wants to sell off the collection, it must be kept together and cannot be sold separately. Bill Vlahos, the portfolio manager at Odyssey Value Partners, a stakeholder in Premier said that they are confident that the buyers have the resources to adhere to the court ruling and that is what is expected from the deal.