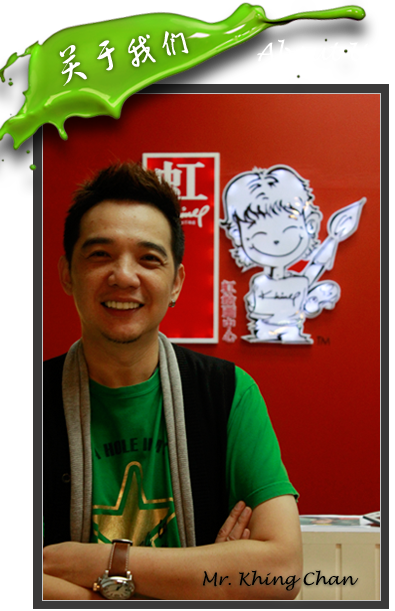 [image title=”Khing Chan – Khing Art Centre” width=”277″ height=”513″ align=”right”] http://www.arts.com.my/wp-content/uploads/2012/07/khing-chan.png [/image]The Khing Art Center is perhaps one of the most unique children art centres in Malaysia today. Established in 1996, the Khing Art Cener brings with it some of the most innovative art courses for children where they are provided with classes that help them to develop their brain power to prepare them for the future.

At Khing Art Centre, the students attend classes that are designed to stimulate their thinking through the use of art and expressive methods. Offering a programme that allow the students to express their creativity and to further enhance their imagination, they are encouraged to be explorative through their projects that will enhance their right brain’s abilities.

Khing Art Center has been operating for many years now and they have nurtured and graduated students from all walks of life where they have successfully achieved proven results through their participation in art related contests and competitions. This shows that the syllabus and curriculum within the Khing Art Center’s framework are highly visible and effective where their students have been able to demonstrate their superior artistic skills and methods.

Founded by Mr Khing Chan, the Khing Art Center was set up to provide classes for students from the younger age. A passionate artists in his own career, Khing’s interest in the creative arts scene have spurred him to play an important role for children to learn art. Khing enrolled into the area of multimedia graphic design after his secondary school and after he graduated, he started the Khing Art Centre.

Today, the Khing Art Center manages and operates several art schools in Penang since it started in 1996 and is one of the most popular children art centres both in Penang and the surrounding region. from there, Khing would continue to grow his business and in 2005, he came across some creative clay art products through a magazine and he expanded the classes from creative painting.

Khing then tried out clay crafting and was amazed to find the potential and possibilities of this medium. He would then venture into clay crafting and due to the fact that it was a new medium for him, he had to attempt several times before succeeding. Through these efforts, Khing was able to fully understand the elements of clay and then he moved on to set up a subsidiary for Khing Art Centre called the D.I.Y Clay Art and Craft.

Through this new found passion, Khing continues to offer the young to love and appreciate arts and crafts in his centres. Through Mr Tsu, a popular flour figurines teacher, Khing would continue to enhance his skills and to expand his art to other parts of the country while his works have been seen and loved by the art-loving community around the region. At the Khing Art Center, children are able to attend highly creative courses like the Clay classes while they also offer courses for teachers who are interested to learn this highly exciting art form. Other classes offered to students include painting, crayon and sketching courses.

Email is not resgistered with us.
Open chat
Ask us in Whatsapp
Powered by