KUALA LUMPUR: One of the finest and most significant works by Malaysia’s world icon artist Datuk Ibrahim Hussein to ever appear at auction, titled Red, Orange and Core, is set to break world auction record for the artist, as well as for any Malaysian work of art to date, at the 2012 Henry Butcher Art Auction Malaysia scheduled to be held at White Box, [email protected] in Kuala Lumpur on May 6.

Photography and sculpture will be making their debut with works by Ismail Hashim and Umibaizurah Mahir, while the sale will also include for the very first time a Chinese ink section with works by Cheong Soo Pieng, Chen Wen Hsi, Chung Chen Sun and Huang Yao among others. Dated 1984, Red, Orange and Core is an unrivalled pictorial masterpiece which represents the artist at his best, where the hallmark Ibrahim Hussein lines had reached its masterful zenith. 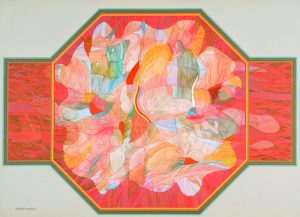 Arguably Malaysia’s most recognisable artist, Ibrahim, otherwise affectionately known as Ib, is the first Malaysian to participate in the Venice Biennale in 1970. He had not only produced an astounding opus of work which established him at the forefront of Malaysian art locally and internationally, more importantly, he had helped elevate the value and status of Malaysian art.

Notably,  Red, Orange and Core is perhaps the only piece by Ib with an octagonal motif, framing the central forms while acting as a focal device. This peculiar octagonal shape, unseen in any other published works throughout Ib’s career, alludes to the feng shui trigrams of bagua which are octagonal in shape to represent the eight fundamental principles of reality.

Now that the artist is no longer around, and with the Ibrahim Hussein Museum and Cultural Foundation closed, it is all the more precious for an opportunity to view the works by this gifted mind.

Illustrated on the catalogue of Ib’s 1986 retrospective at the National Art Gallery, Red, Orange and Core was acquired directly from the artist by the present owner shortly after its creation,preserved in pristine condition for almost three decades. Now, this precious gem will finally appear on public view for the very first time. The reemergence of this significant early work marks a moment of vital importance in Malaysian art auction history.

Ibrahim’s highest priced work to date is The Dream (1969) which fetched RM500,500 at the 2010 Henry Butcher Art Auction. This record was broken in the following year,  when  Latiff Mohidin’s iconic Pago-Pago Forms (1968) sold for RM572,000. Standing 6.5 feet tall and 9 feet wide,  Red, Orange and Core carries an estimate of RM800,000 to RM1.2 mil, and is expected to break the world auction record for the artist, as well as for any Malaysian artwork to date.

Lim Eng Chong, director of Henry Butcher Art Auctioneers, commented: “Red, Orange and Core represents the definite paragon of the artist’s remarkable oeuvre. We are thrilled and honoured to have the opportunity to offer this significant work at auction and we anticipate that it will generate strong interest among both individual and institutional collectors.” A smaller piece by Ib set to attract intense  bidding is a 1979 acrylic on canvas titled Monorobos 1, estimated at RM150,000 – RM250,000. This lot on offer, presented in a unique horizontal format spanning five feet long, is a superlative result of Ib’s earlier abstraction of figure and expressionism  of lines, embodying Ib’s mastery  and innovation in the balance of colours, forms and composition.
Acquired directly from the artist and having been remained in the private collection  for more than three decades,  Monorobos 1 will now resurface on the secondary market. The sale will also see the appearance for the first time a  Mindscape by Latiff Mohidin. International auction houses like Christie’s and Sotheby’s had sold works from other series by Latiff  – Pago-Pago, Gelombang,  Rimba,  Langkawi, Wetlands – but never a Mindscape. On offer is a 1983  Mindscape, estimated at RM120,000  – RM180,000,  which hails from the esteemed collection of Ambassador Dato’ N. Parameswaran, a well respected art lover and collector in this region. The painting was first exhibited at the Maybank Art Gallery in Kuala Lumpur in 1988, and was recently featured at the National Art Gallery in the Yang Terutamaexhibition earlier last year. In excellent condition, coupled with an exceptional provenance and exhibition history, this Mindscape is undeniably a rare find.

A special tribute will be dedicated to the late Datuk Syed Ahmad Jamal, who passed away last year at the age of 82. A unique assembly of 4 rare and early works on paper, along with an arresting painting of a nightscape titled Malam Marang (2001), with an estimate of RM120,000– RM160,000, will be dedicated solely to our National Art Laureate. A video production introducing the late artist and his contributions will also be aired during the viewings. This short video will feature tribute messages and interviews of close friends and family of the National Laureate.

An array of  exquisite watercolours by Malaysia’s most prominent pioneer artists will be featured, including two rare figurative  works  by Abdullah Ariff, an adeptly executed  beach scene by Yong Mun Sen, and a signature rendition of  orchids by Khaw Sia among others.Three works of the pipe-smoking Chia Yu-Chian (1936-1991) will test his popularity again, one of which is his rare Parisian painting dated 1961. This year, the auction will offer an exciting selection of rare and important works by some of the most established contemporary artists in the country, such as Jalaini Abu Hassan, Chong Siew Ying, Bayu Utomo Radjikin, Hamir [email protected], Ahmad Shukri Mohamed,  Kow Leong Kiang and Yeoh Kean Thai.

The forthcoming May auction will have 86 works on offer. Do not miss the preview in Penang at Galeri Seni Mutiara from 5-8 April and in Singapore at Helutrans Artspace from 12-15 April. The full viewing will be held at White Box, [email protected] from 21 April – 5 May. For more details, please contact Henry Butcher Art Auctioneers at 03-2691 3089 / 012-227 5325, email [email protected] or visit www.hbart.com.my.

Was there anyone who was aware of the murals painted by Muhammad Suhaimi Ali, Abdul Hadi Ramli and Muhamad Firdaus Nordin in Shah Alam? The mural

The Artist’s Brush The logic is simple. You can never be too stingy when it comes to art. If you are a painter, you know how

Read More »
PrevPreviousSo you are a new art collector, here are some tips
NextSAGER at HOM(House of Matahati)Next
Open chat
Ask us in Whatsapp