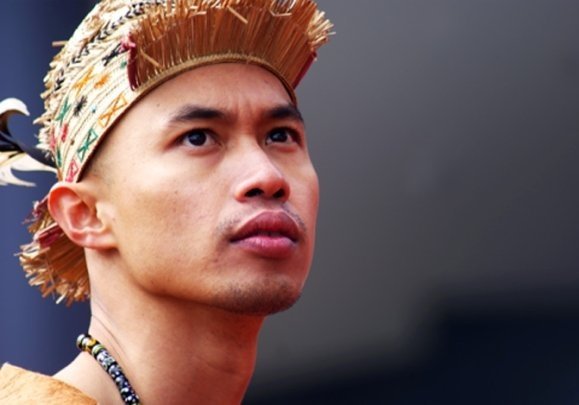 Ashly Nandong is an emerging Malaysian artist, who studies the Borneo traditional ’Sapeh’ lute, traditional Dayak dance (performs dances of the Iban and Orang Ulu sub-ethnic Dayak people group of Sarawak) and is a self-thought contemporary visual artist incorporating Dayak designs which he inherits and continues to promote through his artistic endeavours. His original background of studies is a Bachelor of Mechatronics and Robotics Engineering from Swinburne University of Technology, Victoria, Australia and has now dived completely into the Malaysian Arts industry as a young emerging artist, where he continually devote his time and energy in his artistic pursuit as an artist.

Ashly is currently(as of July 2012) working towards his latest self-organised collective visual arts exhibition project “Seni Collective (Celebrate Individuality, Harvest Diversity)” which will showcase a variety of artist friends of Ashly’s, locally and internationally, from a diverse range of visual arts genre, exhibitions due July 2012 in Kuala Lumpur, and August 2012 in The Penang Performance Arts Centre, Penang; working towards the inclusion of Seni Collective into MACT-Malacca due September 2012. Future projects also includes starting up a Malacca based NGO in facilitating artistic development for the Malacca art scene with Mark and Jyoti, and collaborating with IN FEST Malacca art collective.

Founded the “Seni Collective”, a network of artists includes individuals from Australia, Brunei, France, Japan and Malaysia. The main mission of the collective is to provide venues for the artists to promote their works and to promote an appreciation of art to the society where ever it may be exhibiting, as well as to promote cultural diversity of its artist – November 2012;

‘Pas De Compromis (A reflection of the soul)’ – Organised and curate a collective visual art exhibition, exhibiting artworks by 10 artists of diverse cultures and artistic genre from Melbourne, VIC, Australia – March to April 2008.

Ashly Nandong with his recent artwork