Lathouse or commonly known as LAT 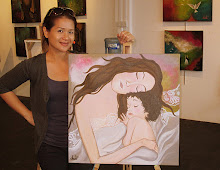 For someone like Debora Teo, art is very much a passion. This can be seen in her artworks where her naive art paintings are truly unique, original and often thought provoking. After all, Debora would come across as someone who is emotionally very strong having underwent various stages of emotional stages in her life.
Debora is a Sarawakian who grew up in Brunei and lived most of her life in Miri, the oil town of Sarawak. She has since moved to Kuala Lumpur where she is married with 2 children and based here. In her work, one can see some of the traditional and cultural shapes through her monumental trees and its fluid branches.

Self-Taught Artist
Debora has been involved in art throughout her life but it was only recently that she started working on art on a full time basis. Essentially, Debora is a self-taught artist and if one looks at her artwork, you will find that she is very consistent in her body of work. Her paintings are fluid and colourful in many ways in which she expresses herself in using several types of subject matter close to her.

She started becoming a full time artist at the start of 2010 when she had a lot of time at home in which she decided to venture into her lifelong passion in art. Having no formal art education, Debora’s art form epitomises the very definition of what naive art is all about. For a self-taught artist, one can see that she paints what she feels and puts them on canvas so effectively. It is as if one is looking at a child painting what they visualize in their minds.

Influence and body of work

She is a breast cancer survivor who was diagnosed in 2006. Having gone through quite an ordeal through her battle with the illness, she has come out victorious and it is through this experience that she adds the richness into her paintings. Hence, one might notice a certain sense of darkness in her body of work which she says are painted by passion and emotions. Some of her works are also dream inspired where it was through this stage of life that she ventured into some reinvention and self-discover.
To Debora, she claims to be a big follower and fan of old great master Gustav Klimt and among some of the influences seen in her work is her interpretation of Klimt’s Embrace. She likens expressing herself in her art to be as important as breathing.

Her paintings are mainly completed on acrylic and oil while she also indulges in oil pastels. Debora is one of the few Malaysian artists today whose work are less commercialized and this means that her works are still very much personal and emotional.

She does not follow the academic and methodological way of painting and uses images of thoughts before they are transferred to her canvas. She recently enjoyed her solo exhibition held at the Jadyn’s Art Gallry in Kuala Belait Brunei in 2010 entitled “Deb’s Art-To-Heart Solo Exhibition”.