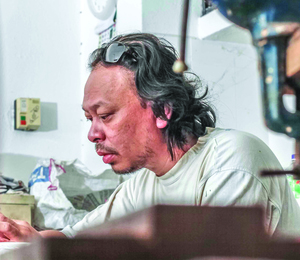 Sabri Idrus’s Profile: Known as one of the most profound artists in Malaysia, Sabri Idrus is born in Kedah in the year 1971. His works are known to be defined through his expression from experimentation of the media. Sabri is a professional graphic designer where he is very actively involved with the production of his art work. Sabri obtained his qualifications in the fine arts with UiTM (Universiti Teknologi Mara) in 1998 where he then put up his first solo show a year after graduation. One could identify that Sabri’s works are very commonly seen in the media which is the industry which he has been working in.

His works are known to encircle around working with surface and spatial stacking with organic fluid and temporality forms which is very much his forte and trademark. His works are also known to be highly intellectual where he successfully integrates symbolism with philosophy which are never literal, offering viewers and appreciators the opportunity to learn more about how his messages are conveyed. His mastery of lines puts him among the best in the art scene and one who is distinguishable through his art work and signature. Breathtaking artwork is what Sabri is known for and he rarely disappoints.

Sabri Idrus’ artwork is very much defined through his signature and trademark lines and that is the very basis of one of his most renowned series entitled ‘Lorek Lorek’. His work is perceived to be highly analytical which are based on the philosophy that ‘where there is life there are lines’. Hence it is very common that one sees his works that uses predominantly lines. Whether they are spiral, horizontal, vertical or just all over the place, a painting that has a lot of lines are very much Sabri’s work.

It is in his mastery and technique in this that makes Sabri stand out among the crowding art scene in Malaysia. Hence in his Incubation piece, one can easily note that it seems to be a work away from his normal etches but still promotes his standard signature. Ripple (2009) was more his forte with a batik-like lines being used. Speed and Spinner are further works that cements his mastery in line production art pieces. His first solo exhibition came in 1999 and since then, Sabri has been working on different mediums to illustrate and promote his specialization that include oil, water and fiberglass. He is also known to have used aluminum, zinc sheet as his base foundation of producing his work.