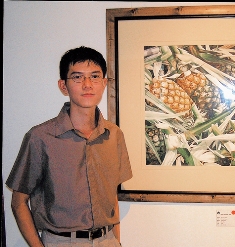 For someone like Yeo Eng Peng, the current contemporary Malaysian art scene might be a bit out of place for him as he is one of the serious watercolour artist of the modern community. One thing about Yeo is that he injects so much realism into his watercolour works that at times, they look more like acrylic paintings. This is perhaps his specialty to ensure that his artwork remains relevant and contemporary enough to stand among the other modern Malaysian artists, who prefers the more pop and modern art form.

Yeo is born in 1975 where he studied at the once reputable Kuala Lumpur College of Art. It was here that he completed his Fine Art qualifications where he finished with distinction. The full time artist is also an art instructor at Akademi Inspire where he also lectures part time at the Dasein Academy of Art in Wangsa Maju. It is not easy to find many artists who still holds strong to the concepts and practice of watercolour medium and Yeo is one of them. Apart from venturing in his art and indulging in his passion, he is also involved with the Malaysian Watercolour Society where he holds the honorary secretary’s post.

Yeo Eng Peng has been involved in the Malaysian art scene throughout his career as an artist where he has held shows and won prestigious awards, most notably within the watercolour medium segment. He won The Cornucopia of Malaysian Arts in 1996, the Special Prize at the 2000 Buncho Watercolour Awards, received Special Mention from Panel of Judges for the Kelantan in Watercolour 2004, the Merit Awards at the 1st Putrajaya National Watercolour Competition as well as the first prize at the 2010’s Putrajaya Flora Watercolour Competition.
He was part of the Troupe Exhibition at the Yeong-Liu Art Gallery and the Shah Alam Art Gallery in 1994 while he was also involved in the ‘Waterworld’ show at Bank Negara in 1996.

The same year saw his works travel to Beijing through the ‘Malaysian Art Exhibition’ as well as the ‘30th Anniversary of KLCA” exhibition held at the Putra World Trade Centre and then at the “Bintang Artists Colony” exhibition at Star Hill Shopping Centre later. In 2000, his works were exhibited at the “Art for Nature 2000 – Forest for Water, Water for Life” WWF show held and organized at the Islamic Arts Museum and in 2001 they were seen at the “SP Setia Art Fair 2001” exhibition in Penang.

Other notable shows that Yeo’s paintings were involved in include the “Six Artists Show” at the Klang Gallery, the “Seoul International Star Exhibition” at Seoul Museum of Art in Korea, the “5th International Watercolour Exhibition”, in Niigata, Japan, “1st International Art Expo Malaysia” in MECC in Kuala Lumpur and many more.

Yeo Eng Peng – The Beauty under the Sun 3

If anyone tells you that this painting was done in watercolour, it would take you a while to comprehend as it has sharper colours as usual. Yeo takes an unusual approach to watercolour where he exudes so much realism and use sharp colours to depict a stronger expression as compared to other types of watercolour works here. The coconut leaves and fruit is painted to perfection in which they are given a realism type of lighting and blend which is not easy to achieve through the conventional medium that Yeo has done so effectively.