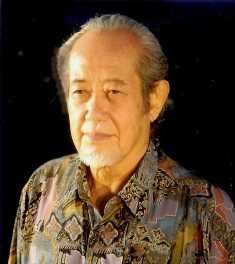 Yeoh Jin Leng belongs to one of the earlier generation of Malaysian artists. Born in 1929 in Ipoh, JinLeng’s work has been widely regarded to be one of the best among his peers and in the Malaysian art scene. JinLeng studied at the Anderson School in his hometown before embarking to a teaching course at the Malayan Teachers’ College in Kirkby in Liverpool. He would then continue on to study art at the very prestigious Chelsea School of Art in London before obtaining his National Diploma in Design. Later on, JinLeng would finish his Diploma in Painting through Chelsea before finishing his ATD Art Teacher’s Diploma at the London University’s Institute of Education. In 1958, JinLeng completed his Cautauld Institute’s Art Lectures on Renaissance Art.

As an artist JinLeng’s work is known for his exemplary techniques that exude a lot of fluidity and flow. They are highly expressive and abstract in their natural art form where JinLeng has cultivated his skills and methods throughout his artistic career. JinLeng is often been regarded as a natural painter where he has also been involved in other artforms that include pottery and sculptures. He started off as a school teacher before obtaining a scholarship to study in London and would continue to teach in various reputable schools and institutions while venturing into his passion in art.

In 1952, JinLeng was given the Sir Gerald Templar’s Award to Outward Bound Mountain School, Eskdale in the United Kingdom while he also won the Special Prize for Painting in Salon Malaysia. Apart from that, JinLeng also won the Japan Ministry of Foreign Affairs’ Prize for Painting during an edition of the Tokyo Biennale. JinLeng was invited to be the guest artist in 1970 during the ‘Federal Republic of Germany Guest Artist to U.S.A.’ prorgamme. He was also recognized by the government of Malaysia when he was awarded the Ahli Mangku Negara for his services and contributions to the Malaysian art industry. Other awards that JinLeng garnered include the 1990 Australian Culture Award, the Minor Prize of the Sculpture Section of the 1992 Salon Malaysia PJC (Pingat Jasa Cemerlang, Terengganu).

He was involved in several Malaysian Art Council Exhibitions in the mid 1960s while he had a solo exhibition at the British Council of Kuala Lumpur. His works have travelled to many countries around the world that include the United Kingdom during the Commonwealth Arts Festival, to Hamburg, Rome, St. Etienne and Paris during the 1967 Malaysian Travelling Art Exhibition while they have also been seen in Japan, India, Singapore, Indonesia as well as in his home in Malaysia, among many others. 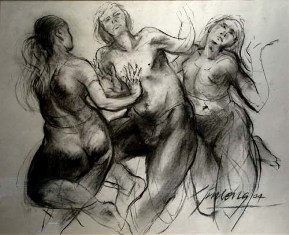 In JinLeng’s ‘The Moving Body’, JinLeng’s signature of fluidity strokes are yet again very well demonstrated where he expresses 3 human figures in a dancing position. These techniques can be said to be very much in JinLeng’s body of work where he achieves with much consistency which is not only seen in his drawings and paintings but also in his more 3-dimensional works like sculptures and others.