So you are a new art collector, here are some tips

Ahmad Shukri’s new works are all about balance 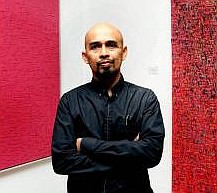 Ahmad Shukri Mohamed’s new works were on show at the recent ‘Golden Gate’ show at Pace Gallery. This would be his latest works where he has worked with a mixed media concept ranging from acrylic to oil, printmaking using silk-screen and many others.According to Shukri, he is intending to make this a series of works that balances between nature and man where it will be his first show in 6 years. The concept of the balance he is promoting is simple citing the left hand as the physical part of man and the right hand being the spiritual. In order for a wholesome society to exist, the left and right elements must co-exist.

Strong and powerful: The ‘Raja Hutan’

In fact, both the sides must work in tandem, very much similar to the concept of yin and yang where when development happens, nature needs to be preserved and replenished. Shukri who comes from Kelantan is already a known Malaysian artist before this show and he rides on the concept that one must replace nature after taking something from her. He said that this new works were based on his intrigue of nature’s power and among some of the elements of the spiritual side of nature is like the thousand shapes of leaves, the changing of colours and lighting of every passing second of time.

There will be 50 pieces of works being shown in the Golden Gate exhibition that will underline different themes that Shukri wants to convey and they range from modernity versus nature to patriotism and the likes. Apart from that, his fascination with nature are also depicted through some of his works of the tiger, butterfly and others. To Shukri, nature’s light is the most obvious changing element as every changing second is totally different from the next and the one before that. Each time the light shifts its position, millions of elements are affected and Shukri wants to feel these moments as he paints and in doing so, produces some of the most magnificent artwork seen.