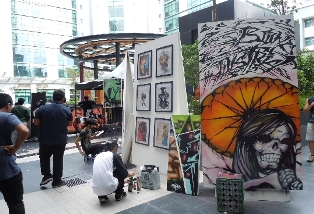 Everyone would have known the new artsy public mall called the Publika Shopping Gallery by now. This is because since opening its doors to shoppers and art lovers alike, Publika has become one of the major players in the Malaysian art scene, providing and offering art exhibitions in its premises, auctions and programmes that help to promote Malaysian art and culture.

Even walking around the mall gives the visitor a certain sense of being artsy because of its very unique interior design and sculptures that are found across its space. There are art galleries, murals and very unique artwork that can be seen all over Publika Shopping Gallery. It houses some of the contemporary art spaces in the Klang Valley while there is also a stage where performance arts are shown occasionally.

The project was undertaken by Sunrise Berhad which is a wholly-owned subsidiary of UEM Land Holdings Berhad where Publika celebrated its first anniversary in September. The celebrations involved performances by renowned artists at The Square, one of the iconic performance spaces around today and there were also food and drinks under the open skies. The Managing Director and CEO of UEM Land Holdings, Datuk Wan Abdullah Wan Ibrahim was at the event together with the senior management team of the company who observed the milestone together with many tenants of Publika through the Jazz Festival which was held for 3 nights.

Performances were delivered by Malaysian jazz queen Ning Baizura and Rozz Ritzmann while there were also games and other events that allowed visitors to win prizes from tenants in Publika like MPH Bookstores, Gymboree, ACE Hardware and others among the 130 tenants operating there.