Now you can view ‘The Scream’ at New York’s MoMA 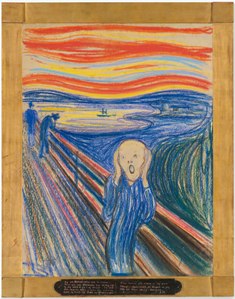 If you have been wondering where the world’s most expensive artwork ever auctioned off, Edvard Munch’s ‘The Scream’ had gone to, then wonder no more because the 1895 painting will be exhibited at the Museum of Modern Art (MoMA) in New York. It will be showcased for 6 months starting October 24th and this is provided for by the new mystery owner who has remained anonymous ever since the high-profile purchase.

‘The Scream’ broke all records when it was bought through Sotheby’s for almost US$120million and MoMA announced that there will also be Munch’s work ‘Angst’. According to the director of the museum, it would be a great opportunity for art lovers around the world to personally view this old masterpiece that has become a subject of discussion for decades.

‘The Scream’ which have since become a symbol of angst and depression has become one of the most recognized paintings in the world. There were 4 versions of this painting by Munch of which 3 remains in Norwegian museums while only 1 is in private collections which is in the United States. Munch made the paintings between 1893 to 1910 and the pastel on board painting is one that has not been publicly seen in New York, which makes it the first.

The rumour is that Leon Black, a New York renowned financier is the person responsible for the purchase although no parties involved in the sale have confirmed anything. He is associated with MoMA by virtue of the board member while he is also one of the renowned collectors in the US where he is known to own paintings by the likes of Manet and Degas, sculptures by the latter and Brancusi as well as Raphael and van Gogh’s drawings.

If the response is too overwhelming, the Museum might consider issuing tickets for the public but one thing for sure, merchandising will be there and security will be very tight.