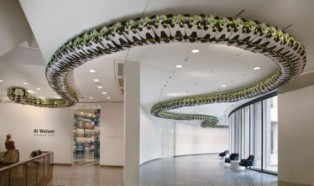 Controversial Chinese artist Ai Weiwei got his show at the Hirshhorn Museum in Washington D.C in the United States recently. The show involved a collection of photographs, videos, sculptures, installations which were focused on his ongoing struggle with Beijing authorities.

The show was appropriately entitled “Ai Weiwei: According to What?” and this is essentially one of the most thought provoking art exhibitions to have taken place in recent years. After all, it gives a true and more honest account of the pain and frustration that Ai Weiwei is going through. Among the work that are on display are some 3,200 porcelain river crabs, which is some sort of resemblance of censorship in Chinese Internet slang, some 7,000 digital photographs which Ai posted on the Internet before his access to social media was blocked by the Chinese government as well as many other thought-provoking works.

Ai said that having spent 12 years in the United States during the 1980s, the show in the country was very meaningful to him after he experienced some very dramatic changes and events in the past few years. Perhaps the most significant event that he experienced was being detained last year by the authorities of Chinese activists where he was confined for 81 days. He could not be at the opening of his own show as Beijing is keeping his passport and he is unable to travel to the United States although his travel ban has been lifted 4 months ago. He is currently facing allegations of tax evasion in China.