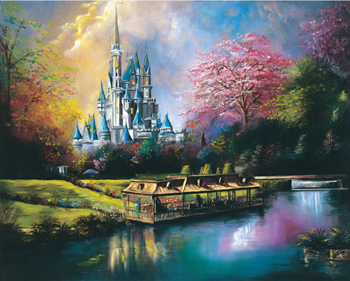 The Collectors’ Editions is the global publisher of Disney Fine Art which is a officially licensed by the Walt Disney Company, one of the most distinguished producer of animated movies. The Collector’s is where one would be able to purchase and own some of the most fine artwork which are original, hand-signed and limited versions by some of the most established and popular artists from around the world like James Coleman, Mike Kupka, Harrison Ellenshaw, Mike Kungl, David Garibaldi, Manuel Hernandez, John Rowe, Tim Rogerson, Noah, Trevor Carlton, Rodel Gonzalez, and Peter Ellenshaw who is a well established legend from the Disney stable among many others. From here, one would be able to own a piece of Disney which cannot be found anywhere else and are commonly only seen through the silver screen.

Disney Fine Art are typically art works which are painted by the original Disney artists using the characters and objects found in the movies and shows and they can be found in galleries around the world ranging from Europe to Japan as well as through Disney related spaces like its theme parks and cruises.

The president of Collectors Editions is Mr Michael Young with Tim Dickson where apart from the Disney Fine Art, they also carry other artwork from renowned artists around the world which are not Disney affiliated. This includes the likes of Tim Rogerson, Brian Davis, George Tsui and many others. However, the main forte would still be Disney related artworks as most of the people in the Collectors Editions team are former employees or have previous engagements with the Walt Disney Company in one way or another. Disney Fine Arts Malaysia is located in Bangsar Village II. The gallery is located in the perfect location but the sales manager doesn’t impress us at all.