15th Singapore Writers’ Festival 2012 to kick off with a bang 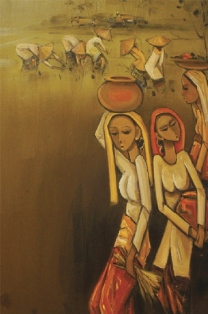 6 renowned artists recently had their works exhibited at the ‘Northern Malaysian Scenes Art Exhibition’ at the Galeri Seni Mutiara in Penang. Rightfully so, the exhibition at Lebuh Gereja’s Whiteaways Arcade showed the daily lives and common practices among Kedahans and were deservedly depicted through the brush strokes of Calvin Chua Cheng Koon, Fong Kim Sing, Kang Ah Sim, Keng Seng Choo, Tean Wei Gin and Lee Choon Kooi, all of whom were established and prominent artists in their respective fields.

The artworks were all done in various mediums like acrylic, ink, oil and watercolour which saw several themes of what Kedah was known for, most notably the paddy planting industry. According to Koay Soo Kau, the director and curator of the gallery, the exhibition was an ideal platform for the artists to showcase their work which have gained recognition both within and outside the country. Kedah is known for being the ‘rice bowl’ of Malaysia, supplying most of the rice for the nation and this was given more prominence through the series of works displayed by the 6 artists.

Hence, it was very much a natural progression for the artists to express themselves through their artwork which demonstrated the laid-back and agricultural environment of Kedah, drawn mostly from their own personal experiences and such. The Guest-of-Honour at the opening of the show was Swedish art colletor, Mr Bertil Samuelson who since migrating to Penang through the Malaysia My Second Home scheme a year ago has become one of the major collectors of art there.