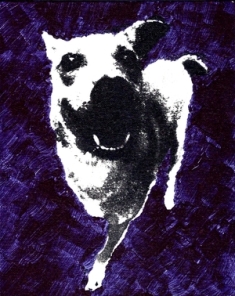 Jessica Chia, a Chapman Art School recently came up with the idea of organizing an art fair to raise funds to help the Noah’s Ark Natural Animal Sanctuary or Nanas in Johor. Chia thought that the art fair would be a great avenue to create awareness among the people about Nanas’ efforts on pet welfare in the southern state while it could also raise funds to help with the operational costs of the shelter.
She got EightLido to help out as the venue sponsor and from there worked with a group of Malaysian artists to hold an art and craft show. As mentioned, it was for a good cause with proceeds to be channeled to Nanas. There was quite some interesting artwork that was put up for sale on November 28, the day of the show which was held at the restaurant lounge along Lido Beach which included other artists like Sofia Cole, Ian Chua and Destiny Lim among others.

Nanas has been actively involved through it shelter home in Pekan Nanas and is working to reduce number of strays on the streets by advocating sterilisation. It has embarked on projects like SOS (Sterilise Our Street) Cats and Dogs and run ABC (Animal Birth Control) mobile clinics for residential areas and remote villages respectively.

With all that involved, funding is very important and the art show is just one of the many ways that seek out to help in the financing areas while it was also a good platform to tell people about what Nanas has been doing and how they can be of help in any way. Chia showed off her collection of cats and dogs portraits using silk-screen technique while Ian Chua of Serendipity Studios created a 3D-art using folded paper. Other artworks include painted glass jars and 3D art using coloured grains of rice were also seen at the fair.