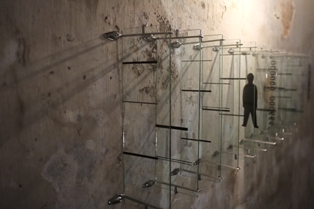 Simply entitled ‘12’, The Warehouse art gallery in Georgetown recently showed some of the interpretations by a group of artists about the widely talked about 21-12-12 apocalyptic date. The show was the brainchild of curator Lee Khai and it encircled around the digit 12 in several ways. To begin with, the Warehouse’ address is 212, Beach Street. As expected, there were 12 artists like Bib Chun, Renny Cheng, sculpture artist Low Chee Peng and one of the very exciting Malaysian artists, Louise Low. Another prominent artist who was involved was Lithuanian mural artist Ernest Zacharevic, who is no stranger to the Penang art scene.

Well, it was some anticipation which came and went without any glitches that paled in comparison to the Millennium Bug (year 2000) but it was an exciting show which embodied the unique works of 12 very different and yet united artists, in terms of the theme. The opening was a lively affair with the art lovers and from the community coming in numbers. The obsession with the date eventually changed to obsession with the art. Works encircled around many different mediums where there were sculptures, installations and paintings. As it was about the apocalypse, there were a lot of works about birth and in some, death.

Zacharevich’s painting on blind perhaps was the most prominent while there were also other notable works including the sculpture of a white baby and many others held within the rustic and traditional gallery in the northern art district that gave the visitors many messages to go home to.