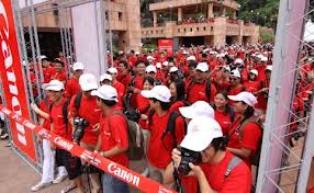 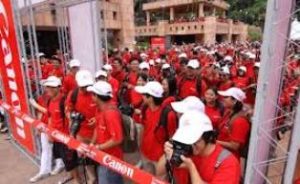 The Canon PhotoMarathon Malaysia 2012 recently kicked off with much fanfare when more than 1,300 photographers participated in the event in 2 Malaysian cities. Organised by Canon Marketing (Malaysia), this was the 6th edition of the competition which saw amateur and professional photographers plying their tricks and techniques among each other.

This was also the event which would be held in conjunction with the 10th Anniversary of the Canon PhotoMarathon Asia series and to commemorate this historic date, it was carried out simultaneously in 2 cities in Malaysia which were Kuala Lumpur and Kota Kinabalu. The event was held at the Boulevard, Berjaya Times Square, Kuala Lumpur and at the South China Sea at Lintasan Deasoka in Kota Kinabalu.

Participants of the Canon PhotoMarathon Malaysia 2012 started with participants getting ready at 8am where they collected their door gifts and merchandises. The T-shirts given to the participants was designed by students of The One Academy in Petaling Jaya. For this event, the Grand Prize winner will win an all-expense trip to Hungary, an EOS 5D Mark III, a Pixma Pro I printer and participate in the 8-day photoclinic with Tristan Yeo, among other prizes.

Meanwhile, the First Prize winner will also win the Hungary trip prize and other gadgets and the Second and Third Prize winners would receive the gadgets through sponsorship from Kata, Manfrotto as well as the National Geographic Society. A cheque of RM32,500 was presented to Ramdas Nayar, the PR Executive of the Malaysian Association of the Blind by Mr Melvyn Ho and Mr Simon Wong, President & CEO and Director of ICP Division of Canon Marketing Malaysia respectively.