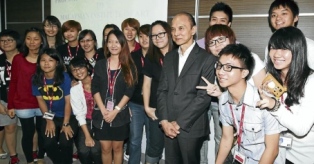 Datuk Jimmy Choo, perhaps the most famous shoe designer in Malaysia recently visited one of the most historical and popular art institutions in the country, MIA or Malaysian Institute of Art. The visit was organised in conjunction with the recent KL Fashion weekend and was one of the programmes by Innovation Malaysia and was aimed at inspiring local and emerging designers of the country.

The idea of the tour was for Choo to visit local fashion institutions that include the education sector in venturing into the creative design industry where he spoke to a group of undergraduates on several issues of the design world. The prelude to the New Generation Fashion Awards 2012 saw Choo talking about his own experiences in the highly competitive design field and about his time in London as a student and the challenges he faced then until what he is doing today.

In his talk, he said that comparatively, it would be harder to make it as a shoe designer today because people are more aware of the prospects in this field while studying in the best places are also more expensive than before. However, with technological advances and facilities, the new generation of designers have all that they need which include information and knowledge. He offered advice to the budding designers and shared who his inspirations are, where he said comes from studying people and what they look for in their shoes. Choo warned the students not to copy other people’s designs and that and said that he is currently discussing with the government of Malaysia in establishing a shoe-designing institution which will train and educate new shoe designers like himself which is a natural step for him since people kept asking him to share his skills and designs while he also gave his advice to students who wanted to continue studying in London.