How to maintain your canvas art 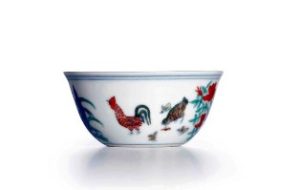 In a recent antique auction by Sotheby’s in Hong Kong, a rare wine cup known to be fired during the Ming Dynasty broke the record when it went under the hammer for HK$281.2 million which is equivalent to RM118 million.

The very rare and tiny porcelain cup is known to date between 1465 and 1487 which existed during the Chenghua period. Painted with hens, chicks and cocks, it is known as the ‘chicken cup’ which now holds the record for being the most expensive Chinese cultural relics to have been auctioned off anywhere.

According to Nicolas Chow, the deputy chairman of Sotheby’s Asia, the ‘chicken cup’ is known to be one of the most sought-after antiques in Chinese art. In fact, each time a ‘chicken cup’ turns up, it sets the bar even higher which has now become synonymous with the Faberge eggs of Tsarist Russia.

The sale broke the record set in 1999 when a similar ‘chicken cup’ was auctioned off for HJ$29 million. Latest reports showed that there are only 16 units of the ‘chicken cup’ left today. Four of them are in private hands while most of the others are in public museums while a few have since been auctioned.