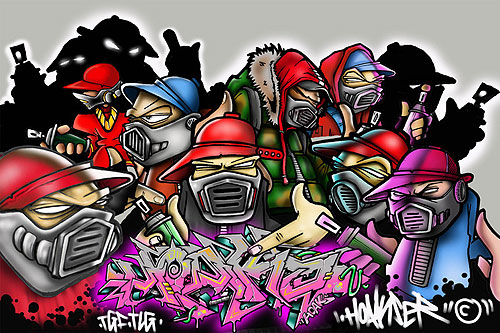 You would have seen graffiti art by now. They are on signboards, along railway walls, on trains and even in art galleries. Some of them are eye-sores while there are some which can be pretty artistic. So is graffiti art a type of art? The truth is, they are.

The thing is graffiti art is always perceived in a negative light because of their existence and the fact that they are commonly seen in public places where they are surrounded by dirty environments and less than favourable exhibition spaces. However, what if someone like Dr Jolly Koh or Ahmad Zakii Anwar decided to paint a graffiti piece in your house? Would that still be seen in an equal negative light? Of course not!

In most cases, graffiti art is associated with vandalism and the damage to public property but it is in fact a true art form because of its unique elements. To begin with, graffiti art are colourful and they adopts a certain degree of colour combination which are original to the artist. Apart from that, they can be aesthetically pleasing if you take time to appreciate them. Furthermore, graffiti art has a message that the artist is trying to convey and this could range from politics to social issues and even emotional expression.

Vandalism
Vandalism can be regarded as an intentional damage or defacing to public or private property where in this context, it is often referred to the former. Where this is concerned, graffiti art can be regarded as vandalism when the artist or group of artists paint their works and images when no one is seeing, very much like a thief in the night. Hence, when such actions are done in an unlawful manner, it becomes vandalism. However, when an artist paints something on public property with full knowledge and in the plain sight of watchers and passer-bys, then it could well become an installation type of work.

In fact, the debate of vandalism and graffiti art has been going on for a long time where the artists would claim to have actually ‘beautified’ the space with their unique art form and very much their expressions of a certain message which they could not express in other medium or space.

History
This art form started off in the 1960s and has continued to grow until present day. The point is, you will regard graffiti art as vandalism if they are painted on the walls of public property without permission of the property owner. Even during the early years, it had failed to garner much popularity as compared to other art form because of the fact that art is often associated with the higher class society while graffiti is seen in subways and the less classy places. Click here to know the History of Malaysian Art

It will take a while before graffiti art becomes the mainstream and this is because graffiti artists are not able to find spaces to display their artwork. Graffiti art is commonly associated with a limitless space where the work can be spray painted or painted on walls where they are free to use the space that they are working with. A wall can be tens of feet long and the artist is free to work around them. Unlike conventional art, the artist is usually confined to the canvas size while they also need to contend with transportation of the canvas after the artist completes the painting.

Unless art spaces, movements and organisations start recognizing that graffiti art is actually a noble art form with its own unique elements and characteristics, artists would continue to work in places where they deemed appropriate. Efforts like the Penang Graffiti Park, which was officiated not long ago should be commended for being one of the pioneers in the promotion of this art form and by providing the space for artists to showcase and express themselves.

On a more artistic perspective, there could be something more worth mentioning in terms of mural art. While graffiti art is commonly referred to with strong and contrasting colours rendered with modern fonts and text, there could be a link between this art form with mural art which are commonly larger paintings on walls of buildings and structures. One such painter who is very popular in this area is Ernest Zacharevic who is a Lithuania-born artist who have been making waves in wall paintings not only around the world but more so in Penang recently.

Zacharevic’s work was seen around the streets of Georgetown in Penang where he painted the likes of ‘Boy on a Bike’, ‘Little Children on a Bicycle’ and others. One of his artwork was recently vandalised by someone who threw wax on the images. This incident drew national concern where restoration to his work was later on carried out. This would provide the best contrast of the difference between art and vandalism where the former offers the viewer with something that could be fathomed and comprehended while the latter is random and is aimed at destroying something.

Hence, it can then be concluded that drawings on walls have come a long way where it has been around since the Egyptian civilisation. Today, they have evolved from mere storytelling to slogans and messages where more and more graffiti artists are portraying their own signature styles when they paint on pavements, walls and other public places. Some contemporary artists too have taken upon themselves to use graffiti art and techniques in their artwork.

In fact, certain artists have their own signature style with graffiti art and they have associated themselves with this art form. The popularity of graffiti art today has grown into the mainstream art scene where murals and wall painting are readily and widely accepted by the general public while they have also generated interests among art lovers on the processes of its methods. Some has used graffiti art for interior design while others view it as a type of installation or even a performance.

So if you are still wondering if graffiti art is real art, make no mistake about this because it is.

Read More »
PrevPreviousShould you allow others to reproduce or use your artwork?
NextAre you too old to become an artist?Next
Ask us in Whatsapp