Malaysia Week 2012 Festival in London brings Malaysia to the world 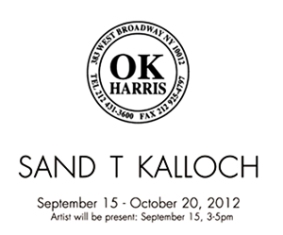 Sand T Kalloch reached a new milestone not only for her as an artist but also for Malaysia art when she held her solo exhibition at the OKHarris Works of Art in New York City recently. Kallloch’s showcase will be one of the five that are being held concurrently at the OK Harris which started in mid September and will be running until late October.

For the show, Kalloch is showing 12 of her new works to the New Yorkers. Kalloch is from a Chinese family and was born in Malacca where she only obtained her US citizenship recently. Her works usually comes in mixed media and she holds a Master of Fine Art from Tufts University and the School of the Museum of Fine Arts in Boston, Massachusetts.

Sand T Kalloch’s achievement would be a great contribution to the Malaysian art scene where her works have been collected by art collections worldwide that include her home’s National gallery of Visual Arts. Apart from that, her works have also travelled across the region that include the Attleboro Arts Museum, Farm Project Space and Gallery, Bromfield Gallery in Massachusetts; BLANK SPACE Gallery in New York and Jennifer Kostuik Gallery in Vancouver, Canada among many others.

The OK Harris gallery was founded by the late Ivan C Karp and is one of the most established art spaces in New York which was established in 1969. Today, it is one of the major contemporary art and photography spaces around where it also showcases events on antiques and such.