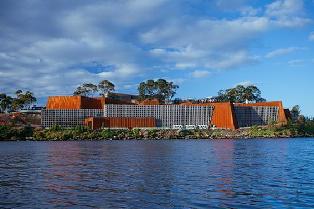 Hobart’s MONA or Museum of Old and New Art made it to the global map when it helped the city of Hobart to be inducted as the top 10 best cities in the world by Lonely Planet, one of the most referenced travel resources in the world today.
Hobart was given the honour for its efforts in creating a cultural hub and the capital of Tasmania has in recent years become quite an attraction among tourists from all over the world for its arts and such. Chris Zeiher of Lonely Planet said that Hobart’s international popularity is the main reason why it receives the recognition which places it on the seventh in the list.

He said that MONA is one of the main attractions at Hobart which essentially draws a lot of attention and visits. MONA in fact has become the main magnet of tourists who come to Hobart and then visit its other attractions while visiting the city and experiencing other things that Hobart has to offer. Apart from MONA, Hobart is also home to another international award winning attraction whichi s Garagistes who is home to Katrina Birchmeier, the 2012 best young restaurateur of Australia.

On top of that, there are also summer festivals like the MONA FOMA and others which would surely be part of the fun and entertainment and drawing in the visitors to the Tasmanian city and making it the only Australian city to make the list and only one of the three from the southern hemisphere.