Pieces of Joy exhibition brings out talents in special children 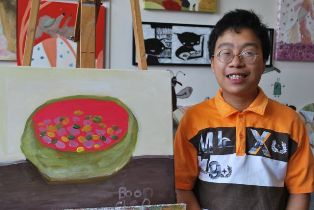 The recent group exhibition ‘Pieces of Joy’ held at the Artemis Art in Solaris Dutamas, Kuala Lumpur brought more than just art to the Malaysian public but it brought about joy and more importantly hope for the less privileged children. The exhibition was organized with the Tutti Art Club where it showcased 42 pieces of artwork from children and young adults with learning difficulties.

One of the participants, Mohamed Fitri Mohamed Raslan, who was diagnosed with autism since 2 years old painted one of the nicest paintings at the show. It would have been unimaginable that Fitri had learning difficulties as he found it hard to button his own shit at 4 years of age as he lacked the eye-hand coordination.

U.C Loh, the co-owner of Artemis Art said that the exhibition was organized to nurture the talents of the children and to create awareness with the public that they too can lead normal lives. He said that the parents were worried that their children might not be independent when they grow older and hence, art might just be a source of income for them then.

The selling of the art work was not the only way forward for the children as Loh said that they are looking on a longer-term income for the children which include reprints and using them for items like calendars and such. T-shirts and handbags too are in the plans so as to help the children garner a more sustainable income in the future and as a form of motivation for them.