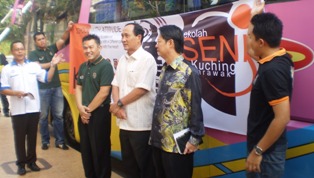 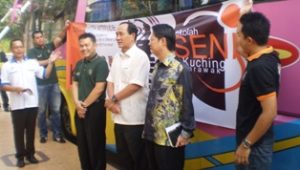 The Kuching Art School is currently in an introduction run which involves 35 of the students in the recently-launched art school with 4 teachers. According to Dr Sluhi Lamat, the school principal, the group is going around Sarawak and into Sabah to introduce the school which will involve a 9-day road tour.

It would fundamentally include most major towns and cities in Sarawak and into the neighbouring state of Sabah where the products and achievements of Kuching Art School will be showcased. This is to draw more potential students to enrol for art courses with the school. The tour, entitled ‘Kembara Seni 2012’ would be quite a unique effort by the art school which pretty much have arts on the go where instead of drawing people to the art, it brings the art to the people.

Dr Sluhi added that the tour is a very unique one because it not only involves exhibitions and such and would include workshops where 100 potential students in Sabah’s Kota Belud have signed up for. The workshops will be run by the students while in Kota Kinabalu, a dialogue session between the student and their teachers have been planned which will help the participants gain not only information but knowledge as well. Prior to heading towards Sabah, there will be performances in Bintulu at their home state and it is a great programme to create more awareness of the existence of this school and what it has to offer, particularly in the area of arts and culture.