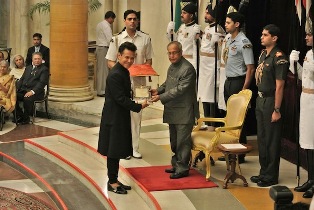 Ramli Ibrahim, Malaysia’s most renowned Indian classical dancer and choreographer was recently given international recognition when he received the Sangeet Natak Akademi Award 2011. This would make him the first Malaysian to be given the award which is the highest national honour given by the government of India for prominent individuals in the performing arts, gurus and scholars in this segment.

The 59 year old received the award from the Indian President Pranab Mukherjee where the special ceremony was carried out at the Presidential House. Apart from Ramli, there were antoehr 35 other artistes who also received the award for their contributions in other different fields. As for Ramli, he was recognized for his works in the Odissi which is believed to be the oldest dance form that originated from India. The Odissi is said have originated from Orissa which is at the eastern region of India and is one of the surviving dance forms of the country.

The performer, who is no stranger to the regional arts scene said that being the first Malaysian to receive the prestigious award is something he will treasure and that it would be surely the greatest honour any performer would be given. Ramli has been performing in many parts of the world for more than 30 years where he has strongly advocated the Odissi dance from a culture to a widely appreciated dance form not only within Malaysia but around the region and other parts of the world as well. Apart from that, he is the artistic director of Sutra Dance Theatre and is an accomplished performer in ballet and modern dance as well.