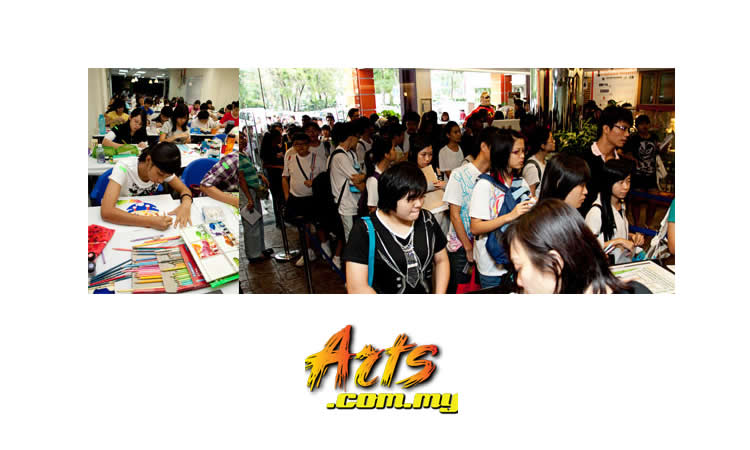 Shortlisted participants who submitted their best design of number ‘3’ attended the On-The-Spot Art Competition, which has been held at selected locations around Malaysia, namely Penang ; Kota Kinabalu, Sabah ; Kuching, Sarawak. The final event wrapped up in Bandar Sunway where the prize giving ceremony was also held on the same day.

During the final day on-the-spot competition in Bandar Sunway, there are seminars conducted by creative professionals on communication design courses where the audience learned more about The One Academy and discovered the marvel of digital painting demonstration by Malaysia’s rising digital artist Beatrice Tan aka Kid Chan.

The Silver award goes to Wong Suet Teng from Kuala Lumpur who took home The One Academy scholarship worth RM40,000, Sony DSLR Camera and Canon printer, followed by Fatimah Ulfah Adnan from Sri Kembangan, Selangor, as the Bronze award winner and won The One Academy scholarship worth RM30,000, Apple iPod Nano and Canon printer. Both winners also received a certificate each in recognition of their winning efforts.

For category B, a storyboard design competition is open for anyone who is 18 years old and above. Participants created their own storyboard based on the theme ‘The Toys Are Alive’. Winners get to take home exciting prizes such as Acer Aspire notebook, Canon Digital Camera, SONY DSLR Camera, Apple iPod Nano and Toy Story movie premiums.

23-year-old Yan Yeh Ying from Kuala Lumpur nailed the first prize of the competition for category B, followed by Gee Meng Chin from Melaka and Danny Hung Chen Wai from Kuala Lumpur as the second and third prize winner respectively.

This year’s Creative Art Award annual competition has been running for the past 13 years and was held in conjunction with the release of Disney-Pixar’s Toy Story 3. The competition also saw a new partner in New Straits Times and with the support by Buena Vista Columbia TriStar and MDeC. Canon has also graciously offered more rewards to the winners of the competition while the Media Partners include Sin Chew Daily, Gempak, Comic King and Pipit.