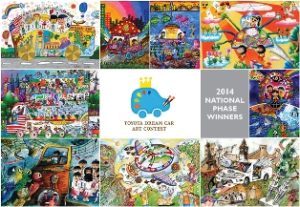 More than 1,100 artworks were received in the 2014 Toyota Dream Car Art Contest. Among them, 9 of the children won the challenge and will be able to contest at the World Contest stage set to be held in Japan this coming August.

The contest was initiated by UMW Toyota Motor Malaysia which involved children in 3 categories, namely Under 8 years, 8 – 11 years and 12 – 15 years of age respectively. The contest has been running since 2004 where children around the world are encouraged to use art to express what their dream car would be like.

From there, new ideas were born and the 9 young Malaysian artists will now travel to Tokyo to try and win there. Lim Xin Ying won the 12 – 15 years old catgorey while Marcus Yu Jack won the 8 – 11 years old category. 7 year old Asher Royce Anthony took home the gold prize in the Under 8 years old category.