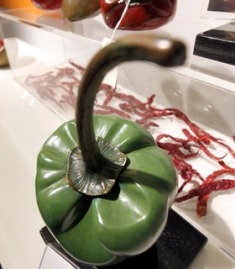 Kumari Nahappan recently made the headlines when her chilli inspired sculptures and artwork. It became the main inspiration for the artist who was once immersed in paintings before moving on to the more 3-dimensional art form of this type of food, which are tiny and sometimes unnoticeable and yet they have more power than many other food larger than them. According to Kumari, chillies are able to make something ordinary become extraordinary.

In fact, the artist is somewhat obsessed with chillies where she will make it a point to look for them at the local market of a new country she visits. The irony of it is that she doesn’t eat them but she loves them ‘too much’. From sculptures and paintings, Kumari has since moved on to making a range of home accessories.

The products can  be seen at the new concept space at Kuala Lumpur’s G Tower Hotel in which her masterpiece, the ‘Wild Chilli Couple’ is enacted at the hotel’s lobby. Essentially, it is a 5 meter tall bronze sculpture while the shop is aptly named ‘The Chilli Boutique’ which is the work of herself and Ravi Nahappan, her son.

While Kumari is the artistic side of the business, her son has used his knowledge in engineering to create the items which are functional and artistic. He said that the idea was born through a conversation with her mother and then started to work on materials to translate her mother’s design into functional boutique. Kumari has been involved with abstract paintings and sculptures for more than 20 years before focusing on her new-found business venture.