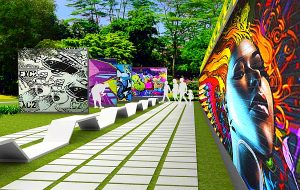 The Penang Municipal Park or more fondly known as Youth Park is one of the places that are buzzing with culture and art these days. This is because the Penang state government will be enacting 7 walls for graffiti artists to express themselves instead of other public places.

This seems to be quite a major step towards the right direction especially to help to dispel the public’s negative perception against graffiti artists who have often been associated with vandalism and menace to society.

With the new walls at the park, just about anyone can not pick up their materials and spray away to create their messages, expressions or just about anything acceptable to the public. The park is located between the pedestrian walkway and the Skate Park and they are constructed to avoid any existing plants or vegetation in the area. 3 of the walls measured at 15meters square while another 4 are 9 meter square feet in size. According to one of the architects of the project Ong Khian Huat, it will also involve one of the 42meters long granite walls of the Skate Park.

Apart from that, they will also be putting up benches and areas for visitors to the park to sit around and appreciate the graffiti art which can be very interesting at times. This project was a collaborative effort between the Penang Municipal Council or MPPP with the Rotary Club of Tanjung Bungahand it is aimed at allowing youths to express themselves through this unique art form which have been around for a long time but youths often find that there are limited spaces to cultivate their talents. After all, graffiti art parks are not new things where they have already been created in major cities like those in Taiwan, Hong Kong, Singapore as well as in the United States and Europe.