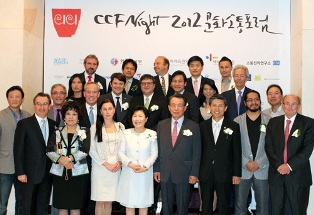 The third Culture Communication Forum in Korea brought together some of the major industry practitioners of the arts around the region and took them for a quick indulgence of Korea and its rich heritage. Korea’s Culture Minister Choe Kwang-Shik hosted a dinner for the 15 guests who came from 14 different countries where they were taken on a tour of the Changdeokgung Palace, one of the oldest structures in the country which was built in the early 1400s.

Representing Malaysia was Mr Suherwan Abu, best known as Wan who is the CEO and curator of Taksu Gallery where he was greatly entertained during the ‘gayageuym sanjo performance, which is an version of the widely popular traditional court dance, ‘Arirang’. There was also a tour of the National Museum of Korea that awed many due to its sheer size and scale. Throughout the forum, participants offered their views and opinions through a series of events and on the issue of “Communication through culture: the key to opening hearts and minds”.

According to the Harvard Arts Museums director in Cambridge, Massachusetts Mr Thomas Lentz, the way the items were exhibited were remarkable which avoided the ‘coin syndrome’ which is a common practice in many museums and galleries today. This is where displays are very much similar and people just passes by as there are not much distinction. Apart from that, participants were also entertained by the modern adaptation of the pansori ‘Sugungga’ entitled ‘Mr Rabbit and the Dragon King’ by Achime Freyer, a very established internationally acclaimed German director.

The forum was held between 4th to 6th September which was hosted by CICI (Corea Image Communication Insitute) that involved participants like Zhang Jun from the Chinese Kunqu opera, Dominique Wolton of the French National Centre for Scientific Research, documentary filmmaker Yi Sun-kyung from Canada and Computer Science Professor Kim Ran-do of Seoul National University among many others.