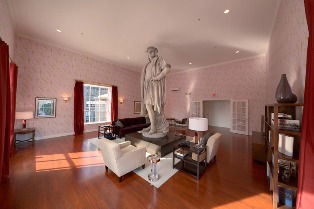 Tatzu Nishi, a renowned Japanese artist has built a sculpture of Christopher Columbus in a penthouse around Columbus Circle of New York. The project was undertaken through the Public Art Fund where a 13-foot marble sculpture of Columbus is carved.

The title of the work is ‘Discovering Columbus’ where it is open to the public. All the viewer needs to do to see this artwork is to by a free-timed ticket, sign a release and climb up to the sixth floor to the penthouse where the figure of Columbus with a beret and the High Renaissance costume is placed.  The surroundings are appropriately suited with hardwood floors and armchairs around. The project was sponsored by Bloomingdale’s who supplied the furniture and its fittings while the 4 large windows around the penthouse channels light into this masterpiece.

Looking down from 60 feet, the statute is quite visible from many parts of its surroundings where the statue is now more ‘protected’ than when it used to be the resting place for birds. Nishi’s artwork will be on display until 18th November and it will remain there for a few months more before it goes through some major conservation.
Nishi has been actively involved in these types of artwork since 1997 where he exhibits his works in many temporary rooms, much like this one. The 52 year old artist has been commuting between Tokyo and Berlin where among his popular works include the building of a living room around a bronze equestrian statue in Guatemala City.