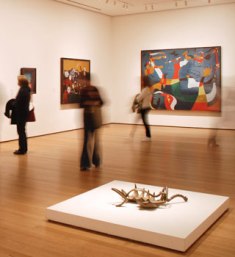 Come next May, the Museum of Modern Art or MoMA in New York will be opened every day. This followed the recent announcement that the Metropolitan Museum of Art in the same city that it is considering opening 7 days a week.

It is a tradition in MoMA to be closed on Tuesday which means that if they embark onto this decision, then Tuesdays will also be opened for viewing. According to Glenn D Lowry, the director at MoMA, the reason that they are taking the step against their old practice was due tot he growing attendance of visitors.

In fact, the numbers of visitors had indeed increased from 1.5million to about 3million since 2004. That was the year MoMA reopened after a major expansion and makeover and to cater for the growing numbers, more days would be ideal. When it was founded in 1929, the museum had originally open daily until 1975 when it practiced closing on Wednesdays due to rising overheads. It would then change the closed days on Tuesdays and after analyzing the entire situation on cost and effect, the museum decided that it would be something which would benefit everyone.

National museums across the country like the National Gallery of Art in Washington as well as internationally renowned ones like the Tate Modern and the Wallace Collection in London are open every day. The idea of staying open longer surfaced 3 years ago and among the ideas that were considered was to extend the opening hours instead of reopening Tuesdays but it seems that the latter is a better option.