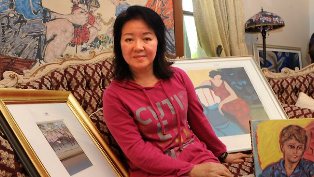 Ms Winnie Chan and her husband Frank watched sadly as many items within their art collection had to be sold off at a public auction held at their Lindfield home’s tennis court. She had spent more than 20 years in building her collection that included art and antique worth more than $1 million but had to give up  a large segment of it as they were running out of space.

The collection is said to be one of the most impressive ones that include 400 bronze sculptures, lithographs, mahogany cabinets and European cars as they will be moving to Hong Kong. The mansion was bought back in 1989 for $1.25million and that would also be for sale eventually. She said that while she has kept away some that are most special, there isn’t one that was her favourite. In fact, there are too many good pieces that she would be reluctant to let go.

There are also a Norman Lindsay pencil drawing, lithographs by Arthur Boyd, a limited-edition intaglio by Salvador Dali, a signed cricket bat by Sir Donald Bradman, a William IV Brazilian rosewood games table as well as an etching and lithograph by Pablo Picasso. The auction saw some 450 people attending which was handled by Charleston’s Fine Art Auctions. According to Danny Taible, the director and auctioneer of the auction house said that it was one of the biggest ones he had ever handled and it was the range and vintage of artworks and antiques that were the main draw of the crowd. Eventually, almost everything was sold and the auction took place for more than 5 hours.